The approach  taken was to start with a known , and to end with an outcome that was established fact, and then – to try and find the most logical way in which the start may have evolved to the known endpoint.  And,  being mindful of the fact that nothing is more common in wartime than unexpected surprises.

The construct provided below, drew upon the following sources:

These were the guiding principles:

It is not possible to  claim that the construct below is definitely what took place in the deployment phase. But, it is by far the best fit. Should definitive proof to the contrary arise, I would be delighted.

S.A.Inf.Bde. informed no bombardment will take place until position of his units is known.

S.A.Inf.Bde.wires 8 a.m. We have been through wood south of Princes Street, and are consolidating it.
Northern portion will not be undertaken till hour when bombardment of hostile posts in Longueval ceases.
Little opposition met with so far. Princes St. and perimeter of southern portion being consolidated.
3rd and 2nd S.A.Inf.Btns. both in wood at present but if shelling which is fairly heavy continues, will thin out.
Suggest bombardment of northern portion not nearer than 300 yards to Princes St.

Instructions to S.A.Inf.Bde. To get on without loss of time and complete capture of entire wood.
Further success of operations against Guillemont and Ginchy depends on completion of present task rapidly.
Use entire Bde if necessary . 1st S.A.Inf.Btn. returns under orders S.A.Inf.Bde.

S.A.Inf.Bde. wires 9.35 a.m. 2 S.A.Inf.Btn. reports one of his Coy`s moved up Strand, and is holding N. end , where it is consolidating.
2 S.A.Inf.Btn. under these circumstances proposes to extend around perimeter from Strand to Princes Street.
Suggestion re barrage must therefore not be carried out.

Instructions to S.A.Inf.Bde. to report as soon as perimeter is completely in their hands. Encircle north of village.

S.A.Inf.Bde wires 12.30 lines are down but hope shortly to have them repaired.

1 Coy 2nd S.A.Btn. has cleared wood west to Strand, so that remaining Germans are cornered in N.W. corner of Delville Wood. Understand bombardment is being arranged by S.A.Inf.Bde.

Bde.Major 26th Inf.Bde. states that 2nd S.A.Inf.Btn. was being heavily counter attacked in N.E. corner, and was running out of SAA. 26th Inf.Bde. were replenishing.

Telephone message from S.A.Inf.Bde. 1st S.A.Btn. has been put on to matter of supply of SAA from dump.
Also reports that enemy`s attacks were most determined and that enemy is massing again to N. Gen. Lukin suggests barrage right round the wood.

13 Corps informed enemy reported to be again forming up for attack N. of Delville Wood, about 5.50 p.m.

The final deployment of the various 2nd regiment companies in the wood by midday 15 July were as follows: { IU RC pp 52 ]

In respect of B Coy however, the Northern/Western boundary is the most  important. The end state viewed from the northwest. 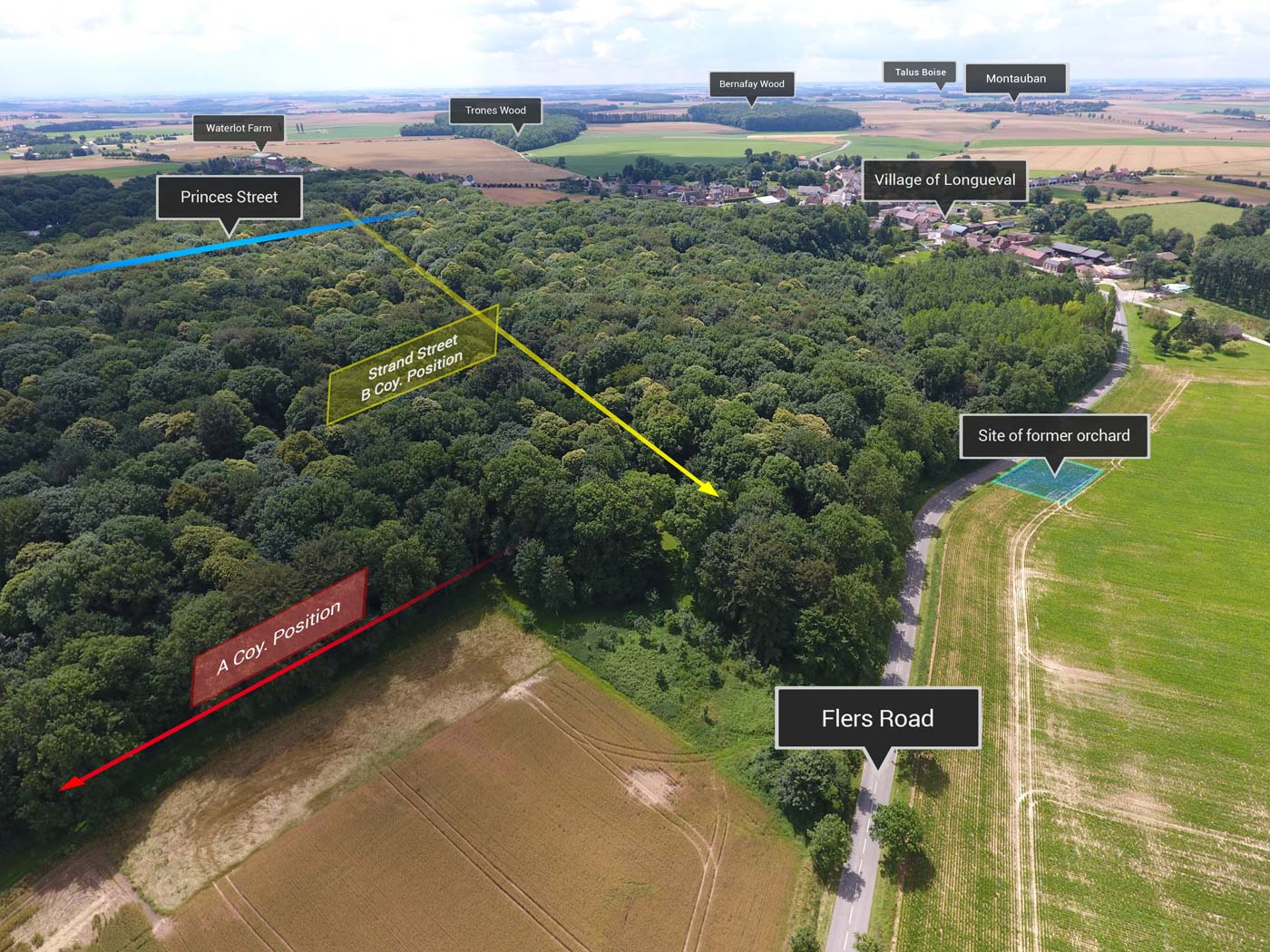 Shown below, from the information contained in the 9 Div war diary, is the sequence of events in deployment of 2nd Regt. 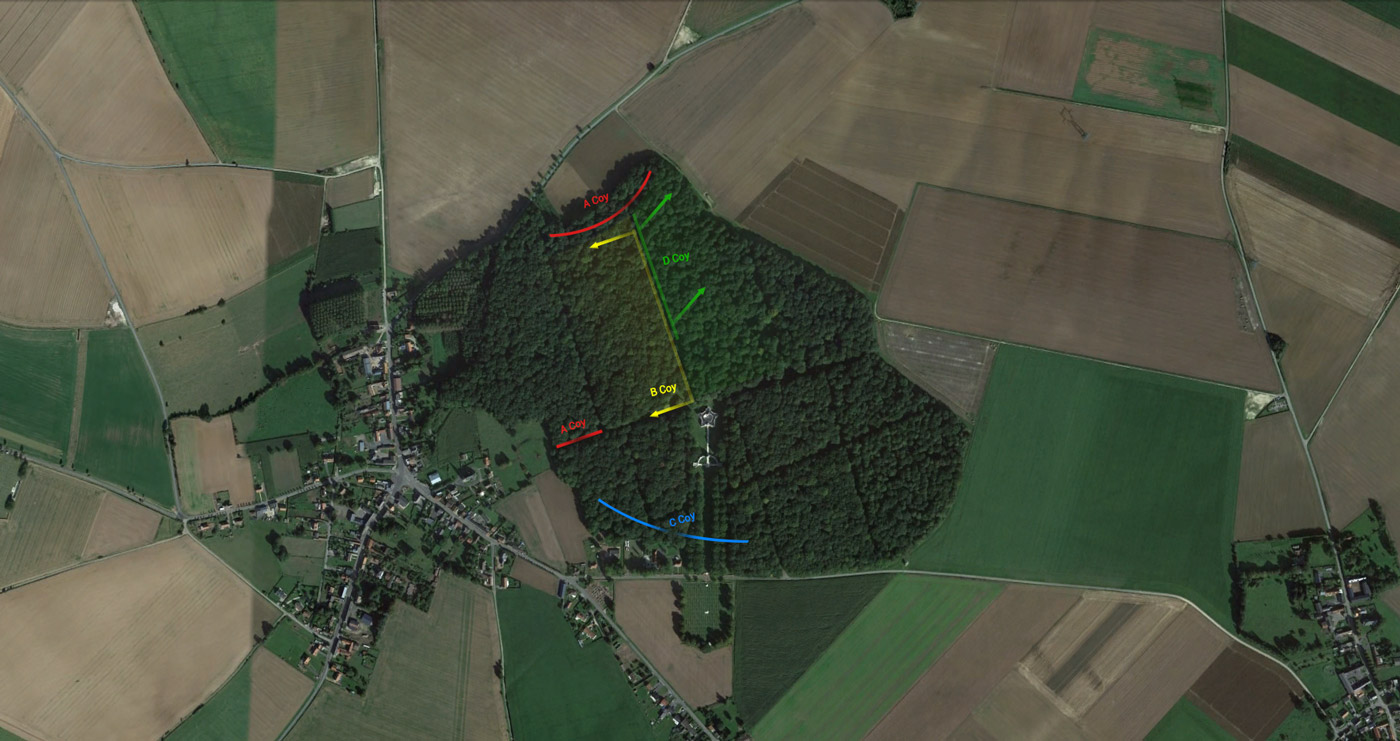 And the sequence of events shown above in the deployment of 2nd Regt in the wood , dictated which part of the wood, which platoon would be active in. And so it was, that no 8 platoon swept the northern extremity of the wood between Regent and Strand streets, just south of the A Coy positions on the extreme northern perimeter.

It seems that after a long hard slog through the wood west of Regent street, with occasional skirmishes with German pickets along the way, B Coy reached Strand street  just before midday, with light casualties at first. However artillery shelling became steadily heavier. [ History of 9 Div War Diary ]. No 8 platoon under Walter Hill occupied the northernmost tip of Strand Street. Part of A company in the meantime under Capt. Claude Heenan,  Lt`s Bru de Wold and Miller , had been holding off repeated German attacks from the Flers road. Lt. Bru de Wold was killed at the outset [ Mem A J Brook ], and Capt Heenan wounded shortly thereafter. Private Brice- Bruce of B Coy, no 8 platoon recalled years later [ IU DW pp 86 ] “ Lieut Bru-de-Wold fell quite close to us , he was shot through the head “ . In his memoir, A J Brook ( A Coy no 3 platoon ) described exactly the same event from A coy positions. This clearly indicates the two respective platoons ( No 8 B Coy and no 3 A Coy ) were in close proximity.

In the meantime the rest of B Coy ( No`s 5,6 & 7 platoons from south to north ) were engaged in short range or hand to hand fighting with Germans advancing from Longueval and probably via the orchard trench. Capt Creed was killed early on in this fighting  ( he was  commanding no 7 platoon at that time ). Capt Barlow was wounded shortly thereafter. Sgt J. Ryder assumed command of no 7 platoon. The shelling continued unabated.

A J Brook mentions in his memoir that after repulsing the fifth German head on assault, A Coy were ordered to retreat, and they withdrew  a short distance  into the wood. D Coy in the north east had been engaged in heavy fighting at the same time. It is entirely possible that German troops entered the wood at this point, directly from the Flers road.  In a letter published by a Newcastle newspaper, L/Sgt R. Dewar ( B Coy no 7 platoon ), wrote to Sgt Ryder`s widow as follows  “ Our company ( platoon ? ) was sent to reinforce another ( either A or D, most likely A ), but unfortunately the Germans had worked their way in between ourselves and our D company ( In other words, through A Coy positions ) and were all well hidden , waiting for us. You can imagine how our poor company ( platoon ? ) suffered, after a few minutes there were hardly any of us left…” .  Sgt Ryder was KIA during this action.

As Col Tanner later recalled [ IU DW pp 82 ] “ The Germans on several occasions penetrated our lines , and had to be dislodged by organised counter attacks. This constant fighting and continuous shelling soon began to tell on our strength… “.  As often as not the Germans were “ dislodged “ by the simple expedient of a bayonet charge.  As Pvt James Simpson recollected [ IU DW pp 75 ] “ The second regiment got cut up driving the enemy out of the wood…”

In the 9 Div war Diary quoted above, 5.08 p.m. entry, German forces also attempted a penetration on “ my left “ ( south ) of Strand street. This may have been the action mentioned by Pte N.J.Vlok ( B Coy no 5 or 6 Platoon ) [ IU DW pp 85 ] “ then hard fighting at close quarters followed and our men drove the Germans back. At this time the only officers left were Lt`s Hill and Tatham. Lt Tatham was with the men, fighting hard and encouraging the men. I did not see Lt Hill. He was on the other ( northern ) flank “.

Due to the losses of Capt Heenan, Lt`s Bru – de-Wold and Miller ( A Coy ) and Capt`s Barlow and Creed ( B Coy ), Capt HMW Bamford  took over command temporarily of A & B Coy`s. He was later wounded on the same day as well.

An analysis of the losses of B Coy complement on 15/7/16 indicates about 112 men were KIA or wounded.  As a result of much close range fighting in those first hours, B Coy suffered a disproportionately high number of dead then . Insofar as the wounded are concerned , a relatively high proportion of wounds were to the wrist, forearm, upper arm and thigh. Whilst not conclusive, this is indicative of  a lot of short range rifle fire.